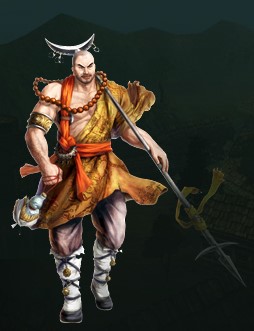 The story goes as follows: The Elder Fachang, who had not left The Holy Temple farther than a stone’s throw in over a decade, decided to see what life had become like in the village below. With five of his most trusted disciples, he went down the mountain and was greeted with praise by all whom he encountered. From every merchant came similar cries: “Master Fachang, try my wares!” “Our pleasure to feed you, Master Fachang, by my family’s heart!” Master Fachang, no cost to you!” And many other similar entreaties, for this village, once an old piece of land, had prospered well of late in the shadow of Shaolin Temple.

Fachang humbly denied their supplications, one by one, and continued his walk. Eventually, his constant escapes from attention wore him down, and he asked his aide to knock on the door of a modest cabin.

Fachang waited, and waited, and had grown weary of waiting when at last his aide returned. “I am sorry, Master. The parents are away, and the only one at home is a small boy, no older than ten years of age. He says we may not enter.” Fachang was charmed by this. He went to the door of the cabin himself and knocked. Once more, the boy answered the door. “As I told your friend, my parents are away. You may not enter.” “My boy,” the Master said, “clearly you do not know who I am.” The boy glared at him suspiciously. “My disciples and I mean you no harm, and surely your parents would—” But before the Master could finish, the boy slammed the door in his face.

All five disciples stepped forward, faces flushed, knuckles white on their staffs… but Fachang held up his hand to halt them. “This boy has taught me much,” he said. “Six lessons on pride in barely a single moment.” The disciples were astounded as their Master listed his teachings. “First, although I appeared humble in the village, indeed I was too full of pride to accept their kind invitations. Second, I allowed my pride to lead me here to exhaustion. Third, upon hearing our entry denied, I believed my noble position could reverse the outcome; again, pride. Fourth, the phrase “Clearly you do not know who I am?” also came forth from injured pride as I realized that indeed, to this boy I was no one. Realizing this, I felt shame and tried to coerce him by telling him we meant no harm and presumed to usurp the voice and will of his parents. Yet another sinful display of pride.”

“But Master,” his aide said, after a long silence wherein Fachang merely stood, smiling at the closed door. “Those are only five lessons on pride.” “Yes,” the Master answered. “And the sixth is the overwhelming pride I cannot halt for this boy who has honored his parents’ wishes, with moral force, against five armed strangers.”

The boy, Guangxian, would later be inducted to Shaolin, receive the name Faxian as his clan name, and become Fachang’s particular student. In time, he grew, tall, strong and wise -- wiser, perhaps, than Fachang imagined.

Faxian was so disciplined in his martial arts training that soon other disciples began to look at him for their lessons, ignoring their trainers. Soon he was training by day and studying by night, taking a little sleep. Often he was assigned to travel along on peace-keeping missions for the clan to settle disputes and enforce the will of The Imperial Emperor.

And then the day came when he appeared before Fachang to announce, “Master, I have learned Praying Mantis, Plum Blossom, Seven Stars, Secret Door, Jade Ring, and Dragging Hand. All seventy-two Shaolin arts are known to me.” Fachang knew this to be true, and meditated long and hard on Faxian’s incredible progress, before proclaiming to the order that Faxian was indeed the reincarnation of Wang Lang.

Word spread throughout the Buddhist community that Shaolin had discovered a master of masters, and Faxian’s followers grew. If a mission was placed by The Empire upon Shaolin, Faxian was the monk they demanded. He was always successful, even in disputes with other clans, and rumors spread that his Kung Fu was the greatest in The Land.

In time, the fame and accolades upon him grew too heavy a burden, and he again came to Fachang, saying, “Master, I have no more art to learn. I grow weary of teaching and deeply concerned by the darkness I see rising in other clans. I believe I must meditate in seclusion. I must leave Shaolin.”

Fachang nodded, understanding the needs of his student. “Leave the Temple, my son. But never leave Shaolin. Indeed, you cannot. For you are Shaolin.”

Turbulent months passed, wherein Fachang was requested, by The Imperial Emperor himself, to send disciples to battle against the minions of The Heavenly Demon Clan, who were slaughtering nobles and seizing power in nearby cities. Many Shaolin monks were slain, and Fachang sent messages down the mountain for Faxian to return and lead the clan in battle. Each time the messages were returned with the same answer, “Forgive me. I am not ready.”

More monks were slain, and Fachang was deeply concerned. His concern grew when rumors began circulating that Faxian had indeed left the order. He was seen wearing common clothes, eating meat and drinking wine in taverns. He was even reported to be frequenting a brothel. For these transgressions and his unwillingness to assist them, the disciples had begun to refer to Faxian as “The Immoral Monk.”

Fachang refused to believe these rumors and again came down the mountain. As Faxian’s parents had long since passed on, he expected to find him living in the very cabin where they had first met, and he was correct. He knocked at the door, and this time, Faxian allowed him to enter.

There in the center of the small room, Fachang saw three of Heavenly Demon’s highest-ranked disciples, bloodied and bound by chains to restrict their movements. Shocked, he asked Faxian, “What is it you are doing, my son?”