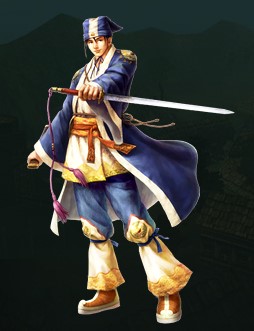 Many years ago, Master Tianxing, the leader of Wu-Tang clan, had dark hair and few troubles. Today his hair is white, and his brow is always furrowed. Like the sacred Yin-Yang itself, all stories and all pupils carry traits of light and darkness.

So it is written that a contest of swords was announced in Shiyan, a small city in Hubei Province, known for its steel manufacturing, to the South of Wu Tang Shan. As the time to recruit new disciples to Wu-Tang clan was drawing near again, The Master Tianxing brought an envoy of his followers to observe, in the hope of discovering fresh talent.

In attendance was a young swordsman, barely fifteen years of age, named Jeng Lei, who was nearly denied admission due to his youth. The contest lasted six full days and boasted over four hundred individual matches. It was during the final twelve matches, each fought in tandem, that Master Tianxing became aware of Jeng Li and his tremendous raw talent. Apparently, the boy was gifted, as he hammered away at his opponent with strikes that were at once both forceful and unexpected. “We have found one,” Tianxing whispered to his advisor, Master Huanghuo. To which Huanghuo replied, “He appears to me a poor choice. Too much rage, and he relies far too heavily upon surprise attack.” Nevertheless, when the contest concluded, Jeng Lei surprised all by taking second place, and Tianxing requested to meet him.

Honored beyond measure to granted an audience with Tianxing, young Jeng Lei and his father attended a dinner. Tianxing would later write that his first impression of Jeng, who sat at the far end of his table, was that of a shy, naive, pock-faced youth. As the meal concluded, Tianxing addressed the boy.

“Jeng Li, do you know that in Wu-Tang we practice a discipline called No-Sword?”

Jeng Li bowed his head. “No sir, I know nothing of this, but if the disciples of Wu-Tang practice it, it must be great indeed.”

Tianxing nodded, then, without warning grabbed up a plum from a nearby dish and hurled it across the table at Jeng Li. Without hesitation, the boy raised a single chopstick and skewered the fruit. A gasp came from the table. Tianxing smiled and said, “No sword, indeed.”

And so Jeng Li was inducted into Wu-Tang’s new class of Tao Apprentices and given the clan name Lingyun. However, at the presentation ceremony, where the apprentices were presented with their wooden training swords, Tianxing interceded with a whisper to the training Sifu, Master Xuanxuan. Then Xuanxuan stepped before the boy and announced, “Lingyun, Master Tianxing has decided that you shall carry no sword. Will you relinquish your weapon?” To which Lingyun bowed solemnly, then handed back the training sword.

So it was that, during the first year of training, Lingyun trained swordless alongside his fellow disciples. Again and again, he was battered and bloodied during practice. But, slowly and painfully, he learned to gauge and anticipate the movements of his fellows, and thus to avoid their blows. In this way, wise Master Tianxing remained faithful to the warning of Master Huanghuo, and Lingyun learned to compensate his natural offensive gifts with sound defense.

At the beginning of his second year, Lingyun, now fully grown, was removed from his class to become a direct pupil of Master Tianxing. He was brought into the central armory by Huangho and told he might choose any sword he pleased.

Thousand different styles of blades lined the walls; Wu Shu butterfly swords forged of chromed steel, Tai Chi swords with jade hilts, Kan Dao broadswords as thin and flexible and sharp as rice paper, and a myriad more. Knowing nothing of the lineage of swords, Lingyun’s attention was drawn to a small, modest wooden box. “I want the sword that lies within this box,” Lingyun told Huangho.

Huangho regarded him with fascination. “How do you know there is even a sword within?” he questioned.

“I have spent my training swordless,” Lingyun answered. “But this box seems to call to me. I’ll take my chances.”

“In other circumstances, I might strike you dead,” Huangho told him. “But Master Tianxing’s instructions were clear: Any sword you wished.” And as Huangho opened the box, Lingyun first laid eyes upon one of the clan’s first artifacts: The Blue Destiny Sword.

Now, the question has often been posed: did all of Lingyun’s natural talents flourish under the tutelage of Master Tianxing, or was Lingyun actually possessed by the grandeur of The Blue Destiny Sword itself? Perhaps the truth lies in a combination within the two, as truth so often does. What is known is that within a year’s time, Lingyun achieved what no disciple since the clan’s founder, Zhang Sanfeng, had achieved: The culmination of the state of No-mindedness. It was so evident among both the disciples and Master Tianxing himself that it needed not be spoken of. Lingyun had gone to sleep one day as a proud pupil and had awoken the next with no sense of ego, desire, or even feelings of membership in the clan.

On the ceremony day that Master Tianxing set aside to entitle Lingyun as Master Lingyun, the young man failed to show up. Instead, they found him sitting alone outside the monastery, whittling a set of chopsticks from the branch of a tree. “Today is the day you were to receive the title of Master,” Huangho told him. “Really?” Lingyun asked, sincerely. “How did it go?”

Months later, there was an announcement brought to Wu Tang Shan that a Grand Championship, sponsored by Heaven’s Gate Clan, was to be held in the name of The Imperial Emperor, and Wu-Tang was ordered to send its best swordsman. “Must I go?” Master Lingyun asked. Tianxing ordered it so.

The competition was held in the distant city of Hefei, and The Master Tianxing again assembled an envoy of chosen disciples to accompany Lingyun. On the road to Hefei, their banners held high; the caravan was attacked by a full battalion of warriors from Heavenly Demon clan. This was Master Lingyun’s first experience in actual battle, and he fought admirably. It is recorded that he dispatched nineteen opponents. Lingyun would later record in his journal that he was deeply saddened by having slain these Heavenly Demon disciples, but that it was indeed The Blue Destiny Sword’s will, not his own.

During that encounter, Master Lingyun fought his way through the wood into the Heavenly Demon’s camp, and there rescued a beautiful young captive named Tara Mayoung. Some call this meeting a blessing, some a curse, but when the two laid eyes upon one another, twin fires of passion ignited.

Much to the dismay of Master Huangho, Lingyun introduced himself to Tara Mayoung not by his clan name, but by his given name, Jeng Li. He then offered her safe passage and gave up his seat in the carriage, choosing to walk alongside her. As she told Lingyun the tale of her capture and torture, Huangho listened with a discerning ear, but the boy was enrapt.

Tara Mayoung was quartered at the Grand Competition as a guest of Wu-Tang in The Imperial Court’s quarters, and she was seated each day near the first row along with the women of The Union of Noble Families to observe the contest. Although Lingyun’s reputation preceded him, great wagers were placed that The Immoral Monk of Shaolin would take the grand prize. On the third day of the competition, however, The Immoral Monk did not arrive, and when a lower-classed polemaster of Shaolin replaced the Monk’s chop on the docket, the odds shifted quickly for Lingyun of Wu-Tang, who had remained so far undefeated. On the dueling ground, his victories appeared effortless, and after each match Huangho was displeased to find Lingyun’s gaze fixed upon Tara Mayoung, rather than on the ground with head bowed respectfully toward The Imperial Emperor and his court.

At the final match, which was to be a contest between Hu Shanshan of The League of Beggars and Master Lingyun, Tara Mayoung was curiously absent from the stands. Lingyun was highly favored; however his straying eye as he searched for Tara brought Huangho much distress. Some say it was The Blue Destiny Sword itself that delivered the smashing blow which split Hu Shanshan’s staff in half, ending the championship, but be that as it may, Lingyun was announced the victor.

As The Imperial Emperor himself strode across the dueling ground to present Lingyun with the wreath, an assassin’s arrow struck the ground between him and Lingyun. The Imperial Guard and Wu-Tang envoy drew their swords to detect the assassin; Lingyun chanced to glimpse a woman poised with a bow atop the stands. As the Emperor was now safe under guard, Lingyun took off after the assassin.

Some say he caught her, others say she had not the will to flee, nd allowed herself to be caught, but all agree that, as Lingyun approached, the assassin unmasked herself. It was, of course, Tara Mayoung, and she revealed to Lingyun that she was a disciple of Sacred Flower Clan, and that her true name was Lunar Umbra. She had been tasked with assassinating The Imperial Emperor.

“Your reputation precedes you as one of the greatest archers alive,” Lingyun said. “Why did you falter?”

“Because,” Tara answered, “I could not risk the chance of hitting you.”

As Tara Mayoung was taken into custody by The Imperial Guard, Lingyun was despondent, knowing full well that she would be sentenced to torture and execution. Master Huangho stepped up beside him and placed a knowing hand upon his shoulder. “Let her go, Lingyun,” Huangho said. “Your sword is in the service of The Imperial Emperor.”

“No,” Lingyun replied. “I am Jeng Li, and my sword is in the service of my heart.” He then cut down The Imperial Guards, rescued Tara Mayoung for the second time, and spirited her away.

But this was not the last The Land has heard regarding Master Lingyun, Wu-Tang’s greatest living swordsman. He would appear twice more; the first time to allegedly steal the Holy Board of Yin and Yang from Wu Tang Shan for unknown reasons. The second time would be to defend Wu-Tang’s honor at the legendary final duel of The War of Nine Dragons.

Have you not heard tell about the Holy Board of Yin and Yang? It’s not so well known among young disciples. It is the most precious treasure of the Clan. I hear it's the key to learning Sword of Tai Chi Wisdom, an Art no one but Master Lingyun could accomplish. But now Lingyun's disappeared, and the Holy Board's with him, and the elders are beside themselves.

I am learning,” The Immoral Monk replied.