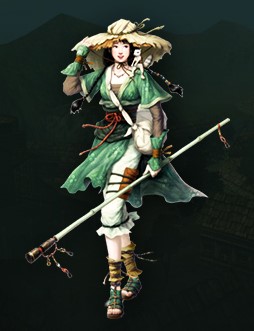 It is said that all armed conflicts begin with a dispute between two men. So it was that the self-proclaimed Emperor Heavenly Demon declared war against The Imperial Emperor in Beijing, and in response, they sent their forces clashing. It was a conflict that brought widespread devastation to The Land. Heavenly Demon raiding parties clashed with Imperial soldiers in every Province, and in each instance, the victor claimed that Province for their master. When the Imperial Court sent a small garrison of soldiers to Tianjin City, they delivered a message instructing the local government to pay a protection tax to retain the soldiers. The greatly impoverished city of Tianjin had no gold to pay such tax, and its citizens were left to defend themselves. With Huabei Province already under siege, they could do nothing but wait and watch for the forces of Heavenly Demon. The League of Beggars, which was headquartered in Tianjin, readied themselves to defend the city’s citizens against attack. It is commonly said that, during times of war, it is a nation’s beggars who are the first to fall.

Lao Hu and Shan Xiayu were both two-knot disciples of The League, recently married, and awaiting the birth of their first child, when the fighting began in Tianjin City. Despite her pregnancy, and against her husband’s wishes, Shan strode out with The League’s envoy. They expected the advancing warriors would see their great numbers and retreat, but they miscalculated.

While The League was successful in beating back Heavenly Demon’s war party, they suffered several casualties. Among them was Shan, who was struck hard in the abdomen by an attacker’s baton. Fearing for her life, and the life of their unborn child, Lao sat by her bedside day and night for two months. With the aid of every medicine and herb they could gather, Shan held on and gave birth to their daughter, who they named Shanshan. It is said the child would smile endlessly at all who came to visit, and the family’s joy became the clan’s joy.

Several weeks later, when Shan passed away, their sorrow became the clan’s sorrow. The clan’s leader, Drunken Fist, declared a month of clan mourning, in which no alcohol could be consumed, and one tenth of all clan proceeds would be donated to Hu Lao and his daughter. And so, Hu Shanshan grew up in the care of The League, by all accounts a most precocious child.

When it came to begging, her beautiful, innocent young radiance and soulful eyes brought her more clan donations than any disciple. During gameplay, for The League is quite fond of their competitions, Hu Shanshan always proved herself to be smart and incredibly lucky. No man could beat her at games of strategy, and always her father looked on with pride when she’d arrive at their barracks with blue ribbons of victory. By the time she reached the age of thirteen, she was admitted as a full-fledged League disciple and nicknamed, “The Flower of The League.” A natural with the staff, she became a Third-knot disciple by the age of seventeen. It was once expressed by Drunken Fist that, “The baton strike which she suffered in her mother’s womb left the indelible mark of a warrior upon her.”

As far as romance went, many high ranking members of the clan sought her hand, but suitors and marriage was never on her mind. Hu Shanshan secretly desired one thing, and one thing only… to train her skills to perfection and one day avenge her mother against The Heavenly Demon Clan. Her chance was not long in coming…

In her eighteenth year, The Emperor Heavenly Demon again sent his minions to Tianjin City, led by a Soul Lord called Burning Hands. The League’s scouts saw Heavenly Demons’ banners approaching, and Drunken Fist marshaled the disciples to meet them on the field of combat outside the city gates. On that first night, the Heavenly Demon Clan dealt a devastating defeat upon The League, ruthlessly slaughtering half their number. Drunken Fist sent out the call for reinforcements to the beggars of neighboring cities, to The League’s friends of Shaolin Clan, and Wu-Tang, but feared the battle would be over long before any could respond.

On the second night of battle, when it appeared all was lost, Drunken Fist proposed a duel between himself and Burning Hands, and the Soul Lord agreed. His council argued against the duel, fearing Drunken Fist no match for direct combat with a Soul Lord of Heavenly Demon. But Drunken Fist saw no other choice, and so he drank down several flasks of The Leagues’ strongest elixir, then strode out to fight for the life of his clan. Hu Shanshan and her aged father saw the battle from afar. It was over quite fast, as feared, for Drunken Fists Kung Fu and staff skills were of little use against the Flaming Saber and Soul-Siphon charms of Burning Hands. What chance is there for victory in man-to-man combat against one who can steal away his opponent’s very life essence? As Drunken Fist fell, his body little more than a charred husk, Burning Hands called for the surrender of The League, and of Tianjin City. He gave them to the next night’s full moon to comply.

The League’s council was in chaos, some wishing to surrender and live to fight another day, some wishing to go out drunk and fighting, prayerful that reinforcements would arrive. None could devise a working strategy for victory. It was then that a tearful Hu Shanshan spoke up. “I have an idea,” she said. “If Burning Hands should fall, his disciples will scatter. We’ll need the help of the citizens of Tianjin.”

And so, beneath the full moon of the following night, a beautiful young woman clothed in a red wedding dress, a bouquet of flowers in her hand, strode along with her aged father, who hobbled upon a walking staff, toward Heavenly Demon’s encampment. They were granted entry, but stopped by an attendant outside the tent of Burning Hands. “Why have you come?” the attendant asked. “We were expecting an envoy from The League with their terms of surrender.”

“I am the mayor of Tianjin City,” the man said, “and this is my daughter. I care not for the beggars of The League, but for my own city’s safety. So I offer you my surrender, and I extend your leader my daughter’s hand as my bond.”

The attendant quickly delivered the news to the Soul Lord, who admitted this move by the Mayor was sound and came out to meet the young woman. Upon seeing her, he was instantly struck by how beautiful she was.

By now word had spread of Tianjin’s surrender, and many of Heavenly Demon’s disciples had gathered to witness the event. Burning Hands stepped forward and placed his hands on the bride-to-be’s shoulders, and she winced as she felt the burning heat from his palms.

“What are the terms of your surrender?” Burning Hands asked of Hu Lao, though his gaze was fixed upon Hu Shanshan’s captivating smile.

“This I cannot do,” Burning Hands replied. “Especially at the request of a League spy!” Then Burning Hands turned and grasped Hu Lao by the throat, quickly dropping him to his knees. “What folly is this? I have already slain your leader; what hope have you of stopping me?”

Hu Shanshan snatched up her father's staff and answered, “I am his hope, demon!”

At that, Burning Hands released Hu Lao, who fell lifeless to the ground, and turned back to Hu Shanshan. “A most pathetic hope,” he said with a sneer. “What hope does a young girl have of -- ”

Burning Hands did not finish his sentence, because Hu Shanshan leapt forward and struck his face with the staff. Seeing the cold defiance in the girl, Burning Hands wiped the trail of blood from his nose, aware that his men were observing all this, and cried for his flaming saber.

Hu Shanshan and Burning Hands faced each other, readying their weapons, and then leaped into battle. Several blows were struck before Burning Hands realized that Hu Shanshan, well-trained and impassioned with rage, was nearly his equal in arms. And so he whispered a fierce incantation that would suck all the life from Hu Shanshan.

But as the charm took effect and Hu Shanshan’s color drained, she cried, “There is more life to me than you could ever drain!” Hearing this, Burning Hands faltered in his enchantment, concerned that she might indeed be charmed.

And as he faltered, Hu Shanshan stepped in with a passionate war cry and delivered a crushing blow to her staff to the Soul Lord’s throat. Burning Hands fell dead.

Hu Shanshan rushed to her father and gasped when she realized that he was indeed still alive. With tears in her eyes, she looked up to see the confused and helpless disciples of Heavenly Demon falling one by one into the hands of her clansmen, as well as the good citizens of Tianjin City.

So it was that The Emperor Heavenly Demon’s forces failed in Tianjin, and Hu Shanshan, The Flower of The League, became their renowned hero. Hu Shanshan would one day become The League’s emissary during The War of Nine Dragons that even then loomed on the horizon, and eventually become herself one of the legendary Nine Dragons. It is there she will finally find her suitor, the one man who can fulfill her dreams of vengeance, when she comes face to face with The Emperor Heavenly Demon himself.