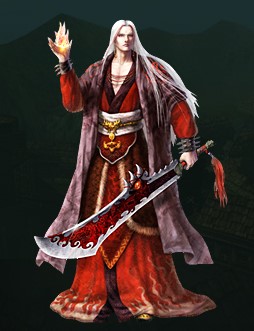 A tragic story of a young man named Dae Chun, born a peasant in a small village in the shadow of Mount Yanmo, and grown to conquer half The Land. Ironically, it was told by a wandering Hermit to the members of the high council of noble Wu-Tang Clan, and it reveals the evil nature of their darkest foe and his followers.

Dae Chun was born during a time of rampant famine and plague to poor parents with little hope of survival themselves. As an infant, he was so pale, fragile and prone to illness, that his father actually prepared his grave on more than one occasion. Somehow, the child survived and grew to young adulthood. As the parents were of strong Zoroastrian faith, believers in Heaven and Hell, Everlasting Life and Resurrection, Dae Chun was not allowed to enter the local Buddhist temple or attend school.

And so, while his parents went to work each day on the farm of a landed noble, Dae Chun, who was far too fragile to work, was left alone. One day, Dae Chun pulled his father’s worn copy of The Avesta from its hiding place to look at the beautiful pictures he’d glimpsed therein. He was nervous, for this book was the family’s most expensive possession, and someone might see him with it and steal it. He opened the book, and much to his surprise and delight, he could miraculously read and understand every word. There in those pages he spent his time each day, living his life through the sacred poetry that revealed to him the great cosmic order, the laws of justice, the shifting forces of good and evil, and the names of The Bounteous Immortals.

On his thirteenth birthday, Dae Chun begged his father to bring him to a local festival where a sermon was to be preached by a Zoroastrian priest. When his father explained they could not afford entry to the festival, Dae Chun pleaded that he must go, and revealed his word for word knowledge of The Avesta. His father was so astounded, that he vowed he would find a way, and eventually did, borrowing two weeks advanced pay from the nobleman for whom he worked.

At the festival, Dae Chun and his father sat in on the sermon, along with a large crowd of illiterate peasants, and when it was concluded, Dae Chun stood up and decried the priest as a liar and heretic. He quoted passages aloud by heart and the stunned crowd believed him, stood and stoned the priest to death. Dae Chun’s father quickly spirited his son home.

Days later, a convoy of priests from the central Zorastrian Temple in Jinan Province arrived at their small cabin. They tested Dae Chun and concluded that he was certainly the reincarnation of a high ranking priest. They requested to take Dae Chun with them, and after many tears, Dae Chun’s father was gifted with a large sum of money and Dae Chun was taken back to Jinan.

At the temple, young Dae Chen was indoctrinated fully into the faith, gave daily recitations, and was granted full access to their archives. There he studied all manner of the orders secret doctrines in earnest. He was even made keeper of the Dare Mihr, which is the sacred fire always kept burning in the temple. One night, Dae Chen discovered a book called the Ilmi Kshnoom, which detailed the occult teachings of Anra Mainyu, the devil. Dae Chen placed the book back on the shelf with trembling hands.

The next morning, Dae Chen began his morning recitation to the priests. He started the sermon with, “I do renounce all evil thoughts, evil words, and evil deeds.” This is what he meant to say, but what spewed from his lips was, “I do renounce all good thoughts, good words, and good deeds, hail Anra Mainyu!” The Temple fell into an uproar, as again and again Dae Chen was tested and could spout only blasphemous filth. The head priest pronounced Dae Chen possessed by a Tishn, a demon of thirst, and the boy was lashed for several hours. When this proved ineffective they performed the Kemna Mazda, an exorcism. Again they failed, and Dae Chen fled the temple in fear for his life.

Alone and on foot, Dae Chen wandered for days on end until the shadow of Mount Yanmo finally fell upon him. When he reached the home of his parents he found the tiny hovel abandoned. Questioning neighbors he was horrified to learn they were murdered by men who worked for the nobleman. Murdered for the money they received as a gift for Dae Chen. A tremendous violence swelled within the boy, one greater than mortal man may know.

Dae Chen ran through the nobleman’s farmlands and up to the gates of his home. A guard with a saber barred his way, and he laughed at the filthy young boy in priest’s rags before him. But his laughter faded when he saw the fire raging in the kid’s eyes, and a force from deep within Dae Chen caused him to lash out, striking his palm to the guard’s chest. Down the guard fell, dead, and Dae Chen looked at his bloody hand and he smiled. He took the guard’s saber and found the nobleman alone in his study reading his father’s copy of The Avesta. The nobleman sounded his alarm and a dozen guards arrived within moments.

As the essence of books was absorbed into Dae Chen, so was the nature of the weapon he held. In a frenzy of blood and sheared bone, he cut them all down one by one. But during the fight, the nobleman escaped.

Dae Chen pursued the nobleman from village to village for days that became weeks. And word of his escape from the Temple and his quest for the nobleman spread throughout The Land. When Dae Chen’s hunt reached to Hubei Province, Master Tianxing, the leader of the powerful Wu-Tang Clan sent his finest swordsman to deal with the problem. After a mighty battle, both Dae Chen and the nobleman were captured and brought to the capitol to face The Imperial Emperor, who had grown curious about Dae Chen.

At the royal court, they were received, and young Dae Chen pleaded his case. The Imperial Emperor denied his claim, since the terrified Nobleman was, after all, his distant cousin. Dae Chen was furious, proclaiming, “A land governed by the depraved must be conquered through corrupt justice, only through fire may it be cleansed!” He went on to rail at The Emperor, that he knew nothing of the true nature of The Land or its hidden destiny, that he himself would grow up to destroy him and take his throne one day. The Imperial Emperor laughed, replied, “Than you shall not be permitted to grow up,” and ordered his guards to execute Dae Chen.

As the guards moved forward, Dae Chen freed himself from his bonds, tore a sword from the closest hand, and lashed back, killing all who came near him with ferocious speed and skill. The Imperial Emperor turned to his consort and whispered, “That young man fights as if possessed by a Heavenly Demon.”

“Heavenly Demon I am,” Dae Chen shouted back across the room, as he laid flat the last of the guards. The Imperial Emperor rose, fearful now for his life, just as the envoy from Wu-Tang Clan re-entered the court. “Mark my words,” Dae Chen offered, backing himself away from the Wu-Tang disciples. “When next we meet you shall call me The Emperor Heavenly Demon!” The Wu-Tang disciples pursued Dae Chen, but he somehow eluded them.

Dae Chen returned to Mount Yanmo, where he began to gather disciples, those who had either lost their faith, or bore harsh grudges against the Imperial Emperor or his nobles. He made them swear blood oaths to follow him, to overthrow The Empire, The White Clans, and any who challenged their new faith. Together, they began building an impenetrable fortress. Once more Dae Chen took up his studies to learn to control the dark forces within him, and once more he lit the sacred fire in a holy chamber, deep within the bowels of Mount Yanmo, that they call The Cave of Light.

By the time The Emperor Heavenly Demon reached adulthood, his fortress was complete and his followers were legion. The Bloody Hands Kung Fu Techniques, and dark arts he passed down to his most loyal disciples made them a formidable force indeed. They rode out across The Land, carrying banners emblazoned with the symbol of Sacred Fire, and proceeded to purge the local nobles and Imperial Troops from the townships and villages. Over the course of fifteen years, as their numbers increased, so did their outposts and territory until soon entire Provinces fell under Heavenly Demon’s control. The Emperor was preparing to make his bid on the capitol, to fulfill his dire wrath against The Imperial Emperor, when The War of Nine Dragons suddenly broke his momentum and stole his attention. He could have easily chosen to ignore the war between the clans, but decided instead to delay his conquest and respond. Was it some greater calling that stayed his hand? Was it simply a matter of ego? Or was it the siren song of The Mistress of Chaos that led him away?

All that is known for certain is that following The War of Nine Dragons, The Emperor Heavenly Demon failed to return. A message was brought to his second in command, Soul Catcher, High Priest of Heavenly Demon, that was verified as written in The Emperor Heavenly Demon’s blood. It was an order to relinquish control of all territories and await his return. Though he was later reported as having been killed, those close to him doubt this as truth, continue to keep the Sacred Fire burning, and await his return.