After conquering an enemy Kingdom or Imperial Army, you will have a chance to capture enemy Heroes. Use your Diplomatic skills to persuade the captured Heroes into joining your Army. This core system from our previous title, Battle For The Throne, has returned with new improvements. 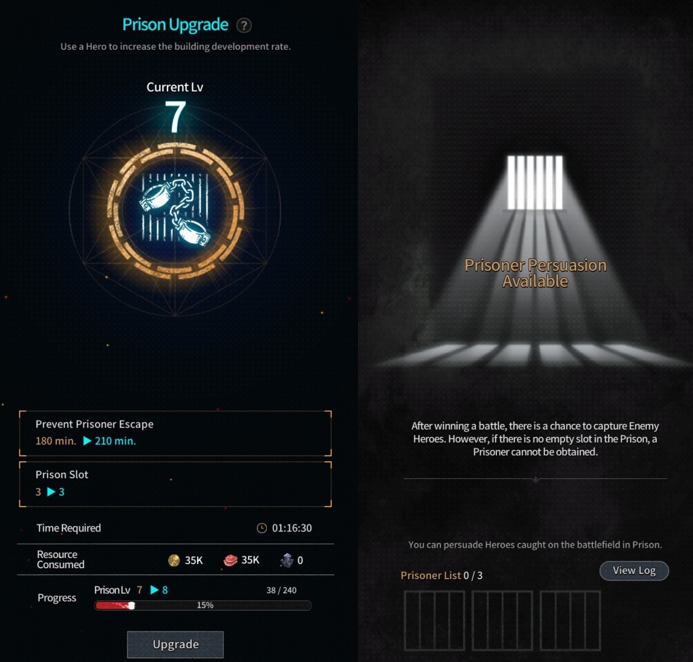 What does it mean to 'capture' and 'persuade' prisoners?

The Prison is where Prisoners are kept after battle. There is a chance to capture enemy Heroes after winning a battle. Prisoners will escape from the Prison after a certain amount of time has passed. Once you succeed in capturing a prisoner after a battle, they will have a set amount of Hostility, and as you continue to use persuasion, the Prisoner's Hostility will go down.

If you succeed in persuading a prisoner, you can use Prestige Points to make the Hero an Ally.

The maximum imprisonment time is based on your Prison's level, and Heroes that are captured in the Prison will remain there for a designated amount of time, based on their Hero Rank. Even when a Prisoner's Hostility reaches 0, the chance to persuade is not guaranteed. In that case, use 'Time Reduction' items to try and persuade them as many times as possible before they escape.

If you want more time to persuade imprisoned Heroes, your best bet will be to level up your Prison.

(Tip) Prisoner Piaf is already captured when you unlock the Prison and is enchanted to never escape, so you can take your time in persuading him.